Blog articles on fun facts and interesting information written by our penguin experts. 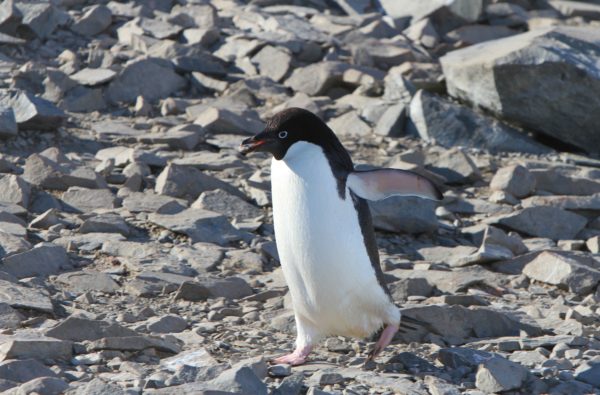 Of the 18 penguin species currently recognized by science, none are quite as mischievous as the Adelie Penguin (Pygoscelis adeliae). These birds live in large colonies along the rocky banks of Antarctica. Adelies, like most penguins, are very dedicated parents. They build small nests out of stones to protect their chicks. Many of these parents even steal stones from other nests in order to protect their own!

Although Adelie Penguins fit the typical morphological description of most penguins (awkward, round, and 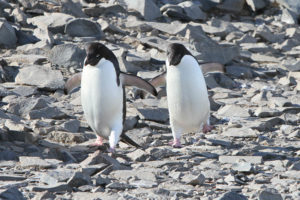 stubby-legged), they are capable of accomplishing incredible physical feats. They migrate up to 31 miles every spring on foot! Like all penguins, they are also capable swimmers. Adelie penguin chicks are able to swim on their own at the young age of 9 weeks.

The diet of the Adelie is quite unusual for that of a penguin. Most penguins feed almost exclusively on fish, but the vast majority of the Adelie’s diet is made up of tiny marine organisms called krill. Krill are small, shrimp-like crustaceans that provide a basic food source for countless marine creatures. Because of the constant threat of predation, krill are highly adapted swimmers. Adelie Penguins must swim with incredible athleticism and stealth in order to catch their food and survive. In a video released by penguin researcher Yuuki Watanabe in 2013, viewers are able to see from a penguin’s point-of-view just how chaotic these underwater chases can be. It is not difficult to appreciate the amazing balance of nature put on display by the competing survival abilities of both species. This ecological balance, however, can only withstand a certain amount of strain before it tips over. 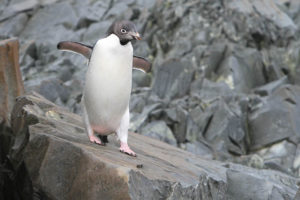 Often times, animal populations are threatened by humans due to overharvesting of their prey. In the case of Adelie penguins, however, an overabundance of their prey may be indicative of a greater ecological issue. According to the IUCN Redlist, Adelie Penguin populations have increased at a rate of about 2% per year since the mid 1990’s. This may sound like great news, but some researchers disagree. According to papers released by Fraser et. al. and Taylor et. al., the increase in Adelie Penguin populations may actually be linked to climate change. Fraser et. al. found that the loss of sea ice on the Antarctic continent has led to greater numbers of krill, thus increasing the survivability of Adelie penguins. Therefore, this massive increase in penguin population indicates just how much climate change can affect an ecosystem. More penguins may sound like a good thing, but in this case they may begin to outcompete other species and begin slowly hunting the krill to drastically low levels. Of course, this is only one issue melting sea ice can cause.

There has been growing concerns in the scientific community about climate change since the 1960s. Governments around the globe started to take action in the 1980s through legislative procedures. Many scientific studies have predicted massive extinction rates, flooding cities, the loss of pollinators (and also therefore fruit) will all be likely events if climate change is to continue on its current course. With the knowledge of how the Adelie Penguin population corresponds to climate change, scientists can begin to monitor the progress being made by rising ocean temperatures in a much simpler way than in the past. Adelie Penguins may now be used as an “indicator species”—a living organism whose presence and abundance can be used to tell us things about an ecosystem. The concept is not a new one; scientists have used indicator species such as marine invertebrates in order to determine the overall health of an ecosystem. Basically, we can monitor the population of Adelie Penguins in Antarctica, and use that information to determine how much sea ice was lost since the last population assessment.

Listed as “Least Concern” by the IUCN Redlist, Adelie Penguins have not taken center stage in any major conservation movements. However, with the information we now possess, we will be able to conduct more studies on Adelie penguin populations and their effects on krill populations to gain a better understanding of how rapidly climate change is melting sea ice in Antarctica. This small, stone-stealing bird is much more than a cute video to be laughed at. It is a looking glass into the health of our Southern Ocean, and may shed light on how quickly we must act to protect it. 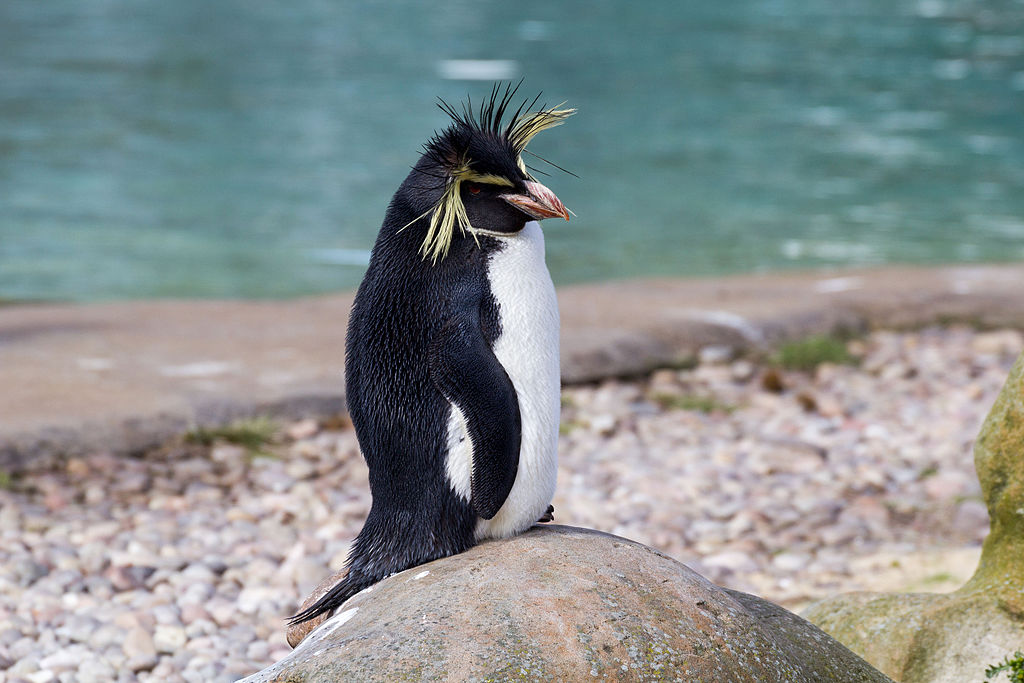 Off the coast of South Africa lives one of the world’s most iconic and charismatic birds – the Northern Rockhopper Penguin (Eudyptes moseleyi). These birds, native to the southern islands Gough, Amsterdam, and the Tristan archipelago, are one of 18 different penguin species alive today. Unfortunately, they are also one of the most endangered.

Northern Rockhoppers are striking in physical appearance. These penguins have a slate-colored back and head, and a white front and underside. The most unique morphological feature on these birds is certainly the long, frayed yellow feathers extending like long eyebrows across their forehead. The most noticable difference between Northern Rockhoppers and Southern Rockhoppers (Eudyptes chrysocome) is that the “eyebrow” of the Northern variety is significantly longer than that of their Southern relatives.

Northern Rockhoppers are stout, athletic birds. Like all penguins, they have modified wings that act as flippers to help them glide gracefully through the water. Aptly named, these birds often hop around awkwardly on land; but they occasionally slide on their bellies on smooth downhill landscapes. Their diet consists mostly of krill, but as opportunistic foragers they will also readily eat fish and squid when they are available.

Once a common sight on islands in the Southern Ocean, the Northern Rockhopper Penguin population has declined at a rate of 3-4% per year since the early 1970s, totaling at a 57% decline. So what has contributed to this drastic population decrease, and what can be done to reverse the current trend? 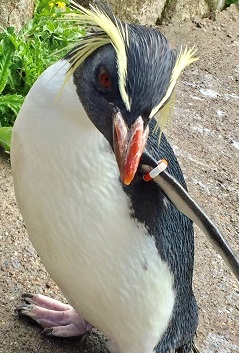 Several introduced species pose threats to Northern Rockhopper Penguins. Chief among these species were feral pigs, until their eventual eradication in the 20th century. Dogs and introduced mice also pose certain threats, though there is a lack of data quantifying the magnitude of their impact on the birds.

Although scientific data quantifying the effect of climate change on penguins is still in the process of being conducted, researchers have reason to believe that abnormalities in the Earth’s natural climate can negatively affect birds like penguins. The main reason being studied is that rising ocean temperatures in the areas in which Northern Rockhoppers live are leading to the decline of fish for the penguins to eat.

Human activity is by far the harshest threat to the Northern Rockhopper Penguin. For years, the birds were killed for feathers, hunting bait, and bushmeat. Their eggs were also harvested to feed the people of the island until as recently as 2011. The rapidly increasing development of human housing, roads and cities have led to a severe decrease in habitat availability for the penguins as well.

A series of laws recently passed in the Tristan island community has sectioned off an entire island to the penguins for habitat without the threat of human intervention. This provides a large area for the penguins to hunt, breed and raise their young. Citizens have also taken action by putting up a fence to keep penguin predators away from the island. Ultimately, the future of the Northern Rockhopper Penguin relies on the continued research, outreach and community education for the benefit of this species. 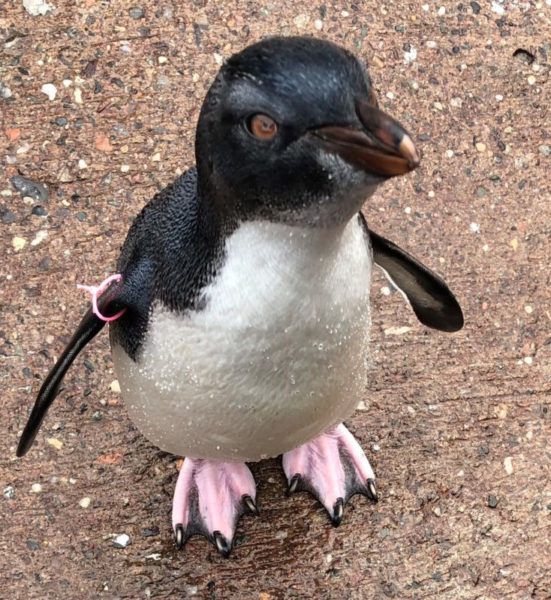 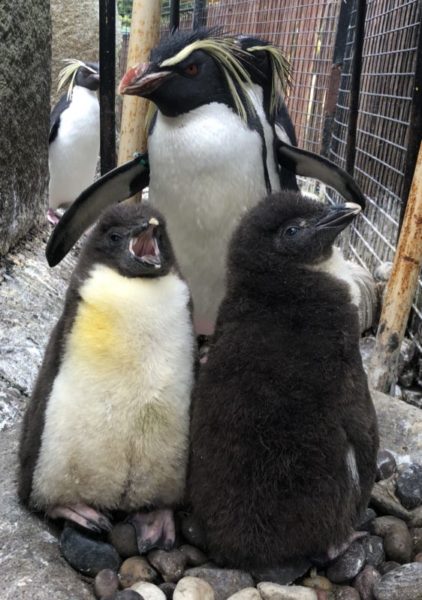 Next, read all about Adelie Penguins!