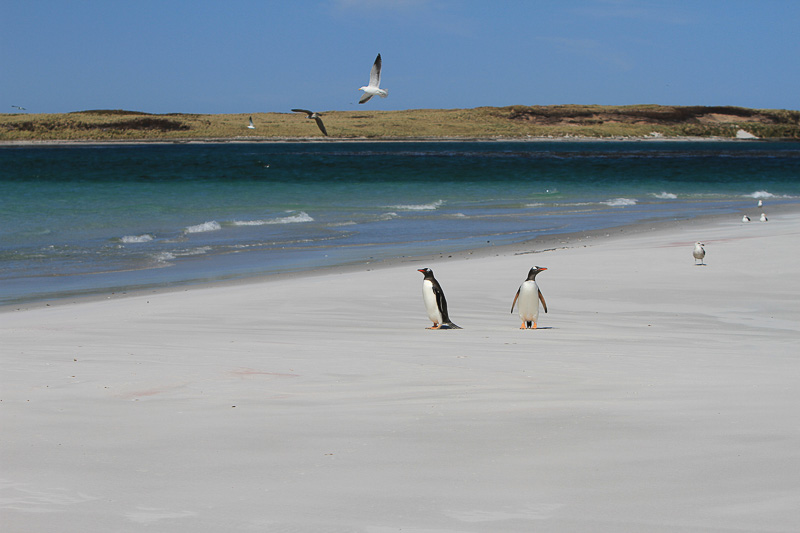 Penguins are both predators and prey — they are in the middle, so they are called mesopredators

Penguins have a dual life. For most months, they swim in the ocean for food. Afterward, they go back to land for breeding or when they have to change their feathers (i.e. molt). However, danger always lurks at both places.

Although adult penguins are generally not worried about flying predators, they turn their alert levels on as soon as they start breeding, because danger hovers in the sky for their chicks1 .

Giant petrels are the most feared predators of penguins. Although most of the time they forage as scavengers, they can be very aggressive hunters when they find suitable prey. Their massive size — up to 8 kg — makes them capable of taking penguin  chicks and even injured adults easily2. 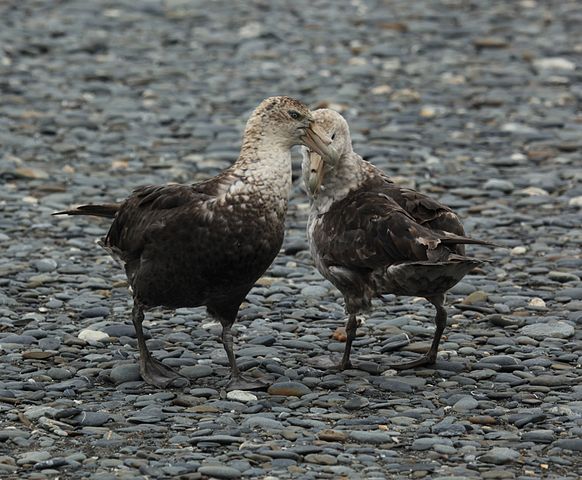 Some penguin predators live right in the colony with penguins

Other feared predators of penguins are skuas. Skuas have mostly been recorded attacking Adélie and Gentoo penguins. Smaller in comparison to giant petrels, they also have powerful hunting abilities. Their best strike is to get chicks at early stages. They prefer to perform in groups, and a group of skuas might terrorize an entire colony at once. Their predation success is higher at the edges of the colonies in comparison to the center, where penguins are generally better protected3.

The skua’s diet is not entirely based on penguins, which also add fish, carrion and sometimes stealing food from other birds to their menu. However, when skua breeding season begins, their dependence on penguins increases greatly. Skuas are often found nesting alongside penguin colonies, as penguins offer a high quality and readily available meal.

Several species of gulls that cohabit penguin colonies also take advantage of a good meal when they see it. Although they are not big enough to prey on adult penguins or chicks, gulls like to harass penguin parents off the nest and then consume their eggs. Oftentimes, many individual gulls attack at once, guaranteeing their success of finding a meal. 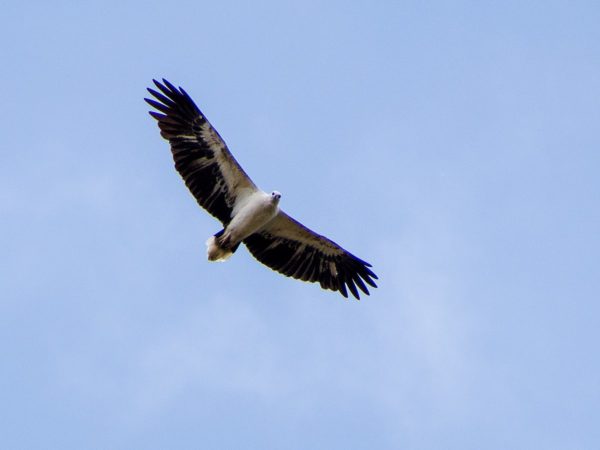 Sea eagles are strong aerial hunters that live in Oceania and parts of Asia. They can reach up to 90 cm and weigh up to 4.5 kg. Sea eagles generally inhabit coastal areas where they look for prey. Their diet is mainly opportunistic, consisting largely on carrion and fish4. But penguins can find themselves on the sea eagle menu as well.

Penguins don’t have many natural predators on land

The penguin’s inability to fly and the fact that they nest on land are two characteristics that determine their choice of nesting habitat. Over millions of years, penguins have chosen nest sites that lack terrestrial predators. This might explain why a majority of penguin colonies are located in isolated islands or places that are hard to reach by foot for most terrestrial animals.

However, humans in their quest to conquer the most remote parts of planet Earth, have taken invasive predators with them or helped with their expansion indirectly. We are talking about dogs, rats, cats, weasels and foxes, which are the most recent additions of threats to the penguins5.

Each penguin colony is exposed to a varying degree of danger depending on the set of modern predators. Potentially, a single fox could wipe out an entire penguin colony in one visit. Adults are mostly helpless when it comes to defense against these predators, as their inability to fly puts them at risk when defending their nests.

All around the world, scientists and volunteers are fighting an endless battle of invasive species eradication to protect penguins. Luckily, such programs have shown high efficacy in becoming one of the most widespread effective measures for the viability of seabird colonies6.

Nevertheless, this battle is constant, as removing one predator (e.g. cats) might increase the chances of invasion success of other animals (e.g. rats). Therefore, seabird colony management requires constant monitoring and extensive efforts to control for all threats and to guarantee the survival of penguin populations.

We have taken a quick look at penguins’ most feared enemies. Each species has to worry about their own set of predators, as the composition of predators depends on where penguins spend their lives. So far, we do not know much about the invisible enemies of penguins, e.g. diseases, parasites, mosquitoes, etc. but we should remember that these also constitute important potential enemies as well.

What do you think about penguins and…friend or foe? Let us know! Also, please help us continue to learn more about penguins by donating to Penguins International. We more than appreciate your support! 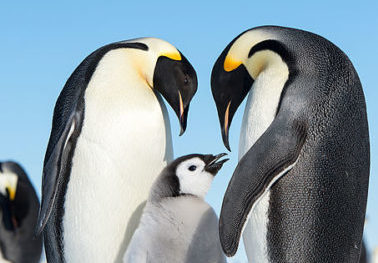 The lives of young Emperor Penguins have long been a challenge to study, owing mostly to their harsh Antarctic habitat. But now, scientists are beginning to get some insight into their early years. Let’s find out more about their secret journeys.

Two key periods in the life of an Emperor Penguin

There are two key feeding periods during breeding for Emperor Penguins. One is after egg-laying, which occurs approximately between autumn and mid-winter in the Southern Hemisphere. At this time, females need to rebuild their body reserves, so they march towards the sea for feeding, while the males stay on the ice incubating the egg. 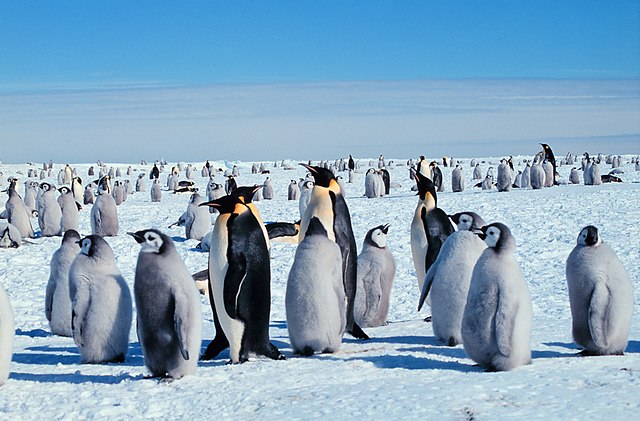 The second critical period takes place during the chick rearing period, from mid-winter to December when the female comes back and it’s the male’s turn to eat something and collect food for the chick. After these long journeys and summer begins to bring life to the surrounding ecosystems, the food becomes close enough and plentiful enough that both parents can alternate this role more frequently.

Feeding places of breeding Emperor Penguins are often found around their colonies in open water areas surrounded by sea ice or in pack-ice regions further off-shore. Both areas provide a variety of food items for breeding penguins, e.g. Antarctic krill, Antarctic silverfish or glacial squid, which are very important for their survival.

What do juvenile Emperor Penguins do after leave the colony?

However, to date, we have been unaware of what happens with juvenile Emperor Penguins after they fledge. Where do they go when they leave the colony for the first time? Young Emperor Penguins depart in December and travel far north mostly to ice-free waters, but their journey from there on has remained unknown, only until recently.

Since juveniles leaving the colony for the first time are probably still learning their best foraging techniques and the best places to eat, scientists have always assumed that young penguins went far away avoiding the sea ice during winter.

In a recent study following young Emperor Penguins, scientists have untangled this journey, giving us further clues about their behavior during their first years of life1.

Scientists gathered information on penguins’ journeys by putting transmitters on 15 juvenile penguins. To be more specific, they looked at their trajectories, traveling distances, depth and temperatures for almost a year since they left their natal grounds.

The maximum distance that a penguin traveled was 7800 km and the farthest distance from the colony was 3500 km. The penguins first traveled north to approximately 53 degrees South latitude and then later around March they started heading back south, remaining around sea-ice. This was a surprise for researchers, as they expected penguins staying in ice-free open waters year round. Instead they remained around sea ice areas at most times (49% of the total recorded trip).

Penguins were mostly active during the day (63% of their time diving) when dives were the deepest, and then during twilight (32%). Nocturnal dives only occurred in 5% of the cases.

Young Emperor Penguins go on an exploration of their environment.

Young Emperor Penguins explored their environment in different ways depending on the season. During summer, just after they departed the colony, they started their journeys diving in the sea ice around the colony and slowly going northwards into open water. At this time, the dives were the shallowest and it was only later during winter when the deepest dives were recorded. The reason why penguins explore deeper waters and the variation found throughout seasons is most likely related to prey availability.

Areas around ice support abundant food resources, particularly under ice. It provides a substrate for ice algae and zooplankton, which could explain the shallow dives of penguins at daylight and twilight. In autumn, krill larvae and other crustaceans are more abundant outside the sea ice, therefore the movement patterns are outside the region of the sea ice. In winter, krill migrate to deeper waters and the penguins are forced to follow them. 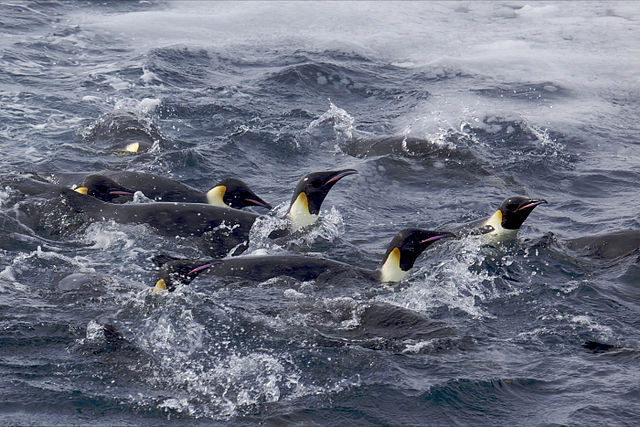 A question that remains unanswered is how do young penguins know where and when to forage? It is likely that foraging strategies are learned with exploratory behaviors during the first months of life in the water. But perhaps there are additional genetic predispositions leading the way as well. Finding out more about the capacity of young penguins to rapidly learn about prey distribution in an efficient way is crucial for their future, as young birds are often more sensitive to environmental fluctuations than are adults. The future of this charismatic species will therefore be better predicted and understood if we keep studying these mysterious and unknown behaviors.

Did you know all this about Emperor Penguins? They have quite the life! Let us know what you learned and/or think. Also, please help us continue to learn more about penguins by donating to Penguins International. We more than appreciate your support!