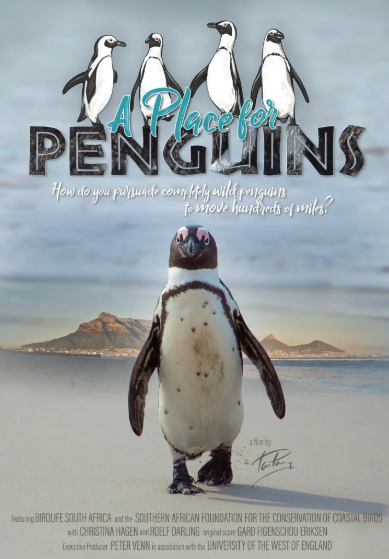 Documentary Film – A Place For Penguins

Ready to learn more about penguins? Find about about a great penguin film from a friend of Penguins International who put this together for his Master’s degree in film in the UK.

Africa is a continent famous for its wildlife. But there’s one resident that’s often overlooked, and many don’t even realise exists – the African penguin.

However, years of overfishing have seen Africa’s penguins plummet to frighteningly low numbers, with scientists at the University of Cape Town recently heeding the gloomy warning that the species could be extinct by the year 2026.

A Place For Penguins follows an unlikely duo as they team up and take on an ambitious, novel and entirely unique project – creating the world’s first artificially-induced African Penguin colony. This story demonstrates that science and art are not mutually exclusive. Conservation is a collaborative effort and if we are going to meet the challenges facing our planet we need to cooperate, think outside-the-box and break down traditional academic disciplines to unearth innovative solutions.

This film was made possible through the incredible kindness and hospitality of many hardworking and dedicated conservationists across the Western Cape. Special thanks go to Christina Hagen at BirdLife South Africa – the brains behind the ‘Penguin Colony Project’ – the South African Foundation for the Conservation of Coastal Birds (SANCCOB) and seabird biologist Alistair McInnes for his amazing support, for which I’m very grateful.

Also a huge thanks to all the crowd-funders who backed the project and helped get me and the University’s cameras to South Africa.

A Little About Me (Tom Parry):

A Place For Penguins is my first ever film and the dissertation project for my recently completed Masters in Wildlife Filmmaking at the University Of The West Of England.

I have experience of the art world, having spent much of my life aspiring to be an artist and building a portfolio of work. In 2013, I put this on hold to go to University and study Zoology, during which I worked with wildlife biologists around the world and developed a strong appreciation for the intricacy and vulnerability of nature.

I’m now working for the BBC’s Natural History Unit on their next landmark series Seven Worlds. 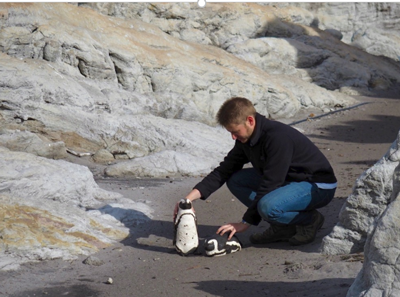 And the correct answer to the number of Magellanic Penguins in the photo above: 16

Okay, yes, this was a challenging question. In fact, of all the people who answered, only 2 got it right!

Which ones are which? For reference, take a look at the circled penguins in the photo above. Those are all of the Magellanic Penguins. Some of them are juveniles, which might have thrown a few guesses off since their plumage is not as distinct. There is one penguin that is well hidden and took a lot analyzing to be sure, and it was the one with the two arrows. More on that below.

How to identify: Magellanic Penguins have two black stripes (and two white stripes) under their chin, with black bills, and black legs and feet. The rest of the penguins in the photo are all Gentoo Penguins. The distinguishing mark of the Gentoo is the white patch on top of its head, and they have orange bills with orange legs and feet. That’s your penguin identification lesson for the day.

Alright, now to discuss the penguin with the two arrows. This one is a challenge because it’s mostly hidden. Take a look at the arrow on the right. That arrow is pointing at the penguin’s head. If you look very closely, you can barely see the arc of the white crescent stripe that curves along the side of a Magellanic Penguin’s head. The arrow on the left is pointing toward the tail. If this was a Gentoo, there would be white showing here along the grass due to the Gentoo’s rounder, plumper body shape which pushes the white feathers on their upper legs out to the side enough to be seen. Instead, only black feathers are showing near the tail. So, based on these markings, that penguin is identified as a Magellanic.

Congratulations to the two winners:

Thanks to all for participating! We’ll have a new quiz in two weeks with more prizes.

The winners from today’s quiz will have a message sent to the email address they provided with instructions for receiving their 2019 Penguins International photo calendar. Great job, you are true masters of penguin identification! 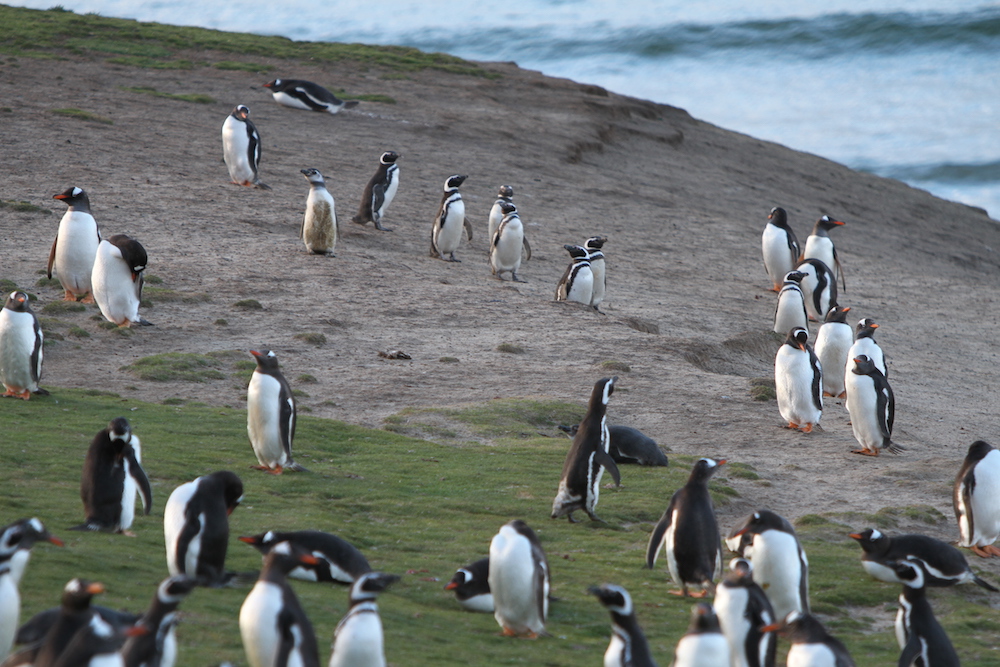 Here’s your chance to show off your knowledge of penguins. And your penguin-counting ability.

The challenge: Count only the Magellanic Penguins in the above photo.

The winner will be rewarded with a free 2019 Penguins International photo calendar. Wait — special for this quiz — the first two winners will receive a calendar. The calendar is posted here in our gift shop.

How to enter? Post your answer in the comments section at the bottom of this page. The first two people with the correct answer will receive a free calendar in the mail.

Remember, count and post only the number of Magellanic Penguins shown in the photo above.

Note: To keep it fair, the answers will be hidden until the afternoon. There will also be a delay in your comment appearing below. Don’t worry, your answer is recorded and time stamped. Check back in the morning for the correct answer and the names of the winners. Good luck!

SANCCOB Seabird Hospital Has Grand Opening For Its New Facility 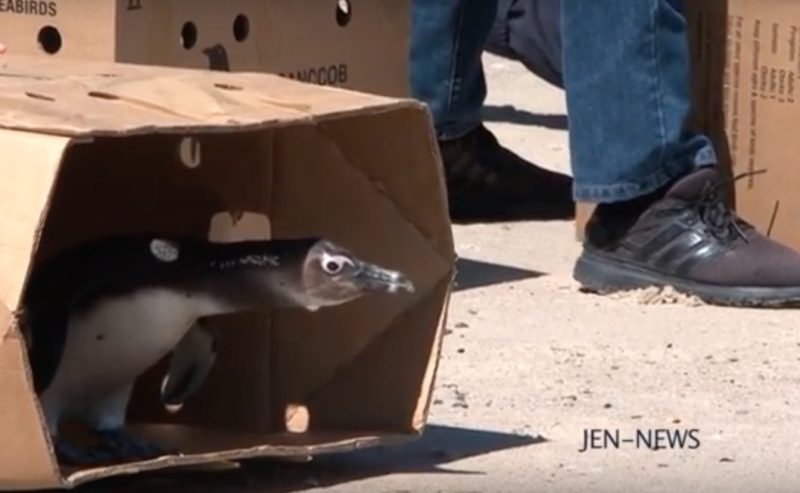 SANCCOB has worked for many years to help South Africa’s seabirds, with particular attention focused on helping to save the endangered African Penguins. Just this past week, they have opened a brand new, high tech facility to not only make a big difference in the help and support they can offer sick and injured seabirds, but also to allow visitors to see their operations, learn more about seabirds, and get close to the birds they save.

Take a look at the video to see inside this new seabird hospital and the grand opening celebration:

SANCCOB’s new facility is the “largest facility of its kind in southern Africa.”

SANCCOB is a 50 year old organisation that has been operating from prefabricated facilities in Table View, Cape Town, for the past 35 years. After receiving seed funding from the National Lotteries Commission, we embarked on a major fundraising drive to cover the shortfall and commenced construction in February 2017.

Our building work is complete and we now have a brand new state-of-the-art seabird hospital, the largest facility of its kind in southern Africa. Specialised areas include two new ICUs, a three-part wash bay area for oiled birds, two surgery rooms, X-ray room, an aviary, and pens and pools. The new centre will allow SANCCOB to increase its capacity to admit and rehabilitate more seabirds, improve our standard of care and educate more people about the plight of the endangered African Penguin species and other seabirds. We will also reopen to the public for educational tours and have a new shop facility at the centre.

Be sure to check out these videos to see their grand opening celebration and their recent release of rehabilitated African Penguins.

These penguins are found covered in oil from the nearby shipping vessels and the birds must be thoroughly washed and nursed back to health before they can be released. This video shows the amazing work SANCCOB does to save these penguins that would otherwise die if they weren’t helped by the dedicated staff at this seabird hospital.

Thanks SANCCOB for all you do!

And be sure to post comments below if you’ve visited SANCCOB or have stories to tell about African penguins.

African penguins don’t like the cold — read more about other penguins that love the heat!