By Megan SpoffordJanuary 27, 2020 No Comments 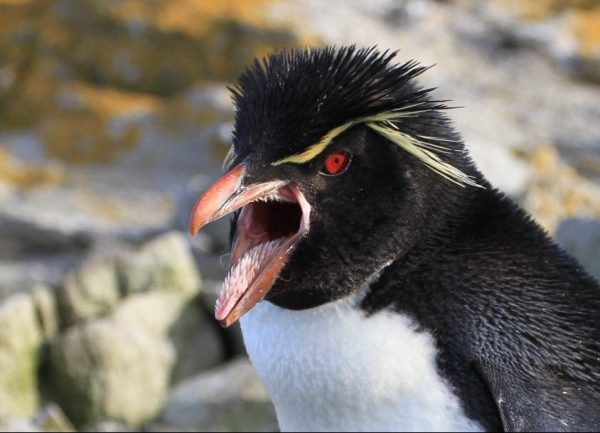 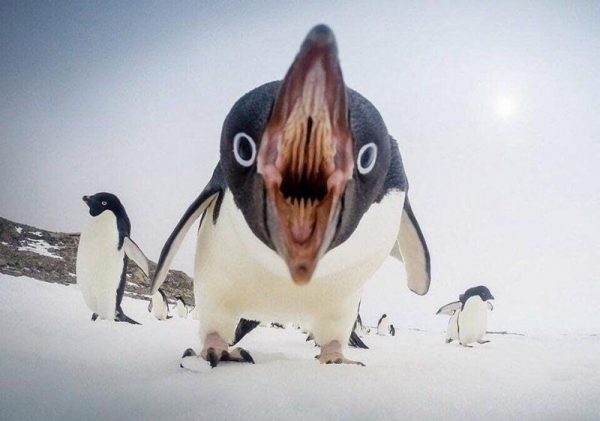 What the inside of a penguin’s mouth looks like.

A quick description of a penguin’s bill

From the outside, a penguin’s mouth, the bill, is one of its defining characteristics. There are variations in color for each species of penguin, which can be beautiful, like the King Penguin. The bills are hard keratin formations (keratin is the tissue that makes up human hair, giraffe hooves, and rhino horns). It has a hook on the end that helps a penguin to grip items. (This, of course, comes in handy since penguins do not have arms or hands like us.) There are also two nares on either side of the bill so the penguin can breathe with its bill closed, and which additionally serve as exit points for secretion of the highly concentrated salts they ingest.

What are those spiky things inside a penguin’s mouth?

By shifting focus to the inside of the mouth, we encounter that horror that I mentioned. Of course penguins do not have teeth, but it sure looks like their tongue and the roof of their mouth does! Those teeth-looking structures on the tongue and palate are actually comprised of soft keratin spikes called papillae. They appear sharp on the top, and curve backwards toward the back of the mouth.

What are the functions of those papillae on a penguin’s tongue?

First off, you may notice that those spiky papillae all point toward the back of the penguin’s mouth. Those work a bit like a fish hook. The penguin can grab onto a slippery fish and that food will now only move in one direction – down the penguin’s throat!

All tongues have papillae, including ours, but the penguin’s is more pronounced. It is believed that the reason for this is the function of the tongue. Animals that have “protruding papillae” are typically food collectors. Penguins certainly have pronounced papillae, and collect their food in the ocean! Tongues that have papillae that do not appear to protrude are said to use their tongue as a means to push the food around the mouth, and down the esophagus. Penguins can do this as well, although it has not been well documented. More than likely, the movement is limited, but it can move from side to side, and up and down. Finally, there are tongues that are meant to lie flatly so that food can travel down the esophagus when placed in the correct position. For penguins, all three of these functions seem to apply, with the latter being most applicable to chicks.

Anatomy of a penguin tongue

Underneath the papillae are fatty tissue, connective tissue, mucus glands, and serous glands. The salivary glands are present toward the back of the mouth, and secrete both mucus and serum. In a study conducted on Magellanic Penguin oral structures, salivary glands were present from day 1, but continued to develop, and secrete more beneficial mucus as the subjects got older. Most other birds maintain the same level of development of gland and mucus secretion from birth onward. It was once believed that seabirds who ingested foods from the marine environment would have smaller glands that secreted lesser amounts of mucins because the food was already lubricated by water. However, evidence from the study on Magellanic Penguins supports the theory that the salivary glands have a specific purpose other than to function based on their diet. The purpose could be for any of the following reasons: to break down food, protection from minor injuries, and keeping harmful organisms from creating disease in the mouth.

What about penguin taste buds?

Most species of birds lack the gene receptors for sweetness, but penguins have even fewer taste buds. Some studies have found that only the receptor genes for salty and sour flavors showed up in penguin species. It’s hypothesized that umami, bitterness, and sweetness gene receptors evolved out of the penguin sequence, because their ancestors lived in cold environments where those receptors do not function well.

How cool, (horrendous!), and unique is the penguin mouth?!?!

Do you want a mouth, or taste buds, like penguins? Did you like what you learned by reading this blog? Leave a comment below. And please help us to continue to provide you with penguin news articles by donating to Penguins International.