By Georgia PodmoreJanuary 21, 2020 No Comments 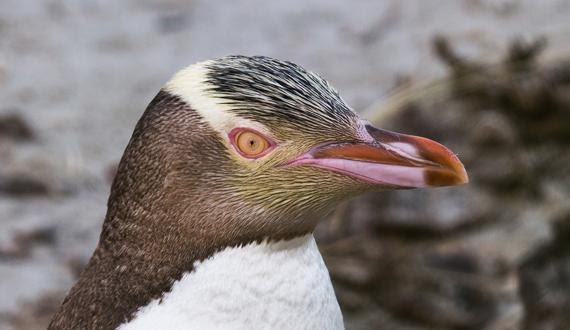 The Yellow-eyed Penguin is one of the rarest penguin species in the world. It is found north of the Antarctic Ocean, along the coast of Southern New Zealand (Ellenberg, Mattern and Seddon, 2009). As the name suggests, the penguin is easily identifiable by the yellow colour around its eyes, along with a brightly coloured yellowish line that runs from its eyes round the back of the head.

Like other penguins, the Yellow-eyed Penguin is carnivorous and preys on marine animals, such as crustaceans, cephalopods and fish. They are one of the larger species and can grow to approximately 75cm in height (Ellenberg et al., 2007). The penguins will breed once a year with their mate, who remain faithful to each other. The female will lay two eggs and both parents will help with incubating the eggs until they hatch. Once hatched, the chicks will stay with their parents until approximately twelve months old. The nesting sites for Yellow-eyed Penguins can be found in the forestry and shrubs that run alongside the southeast coast of New Zealand (Doc.govt.nz, 2019). Historically, the nesting sites have been undisturbed, however in recent years the penguins have had to face land predators. This has resulted in the species becoming an endangered animal with a wild population of less than 4,000 individuals (Yellow-eyed Penguin Trust, 2017).

Yellow-eyed Penguins must deal with predators near their breeding grounds that are now beginning to hunt on their eggs. These predators include feral cats, stoats, ferrets and dogs (Ellenberg et al., 2007). On land, these predators are generally not a cause for concern for adult penguins. However, due to predation on their eggs, Yellow-eyed Penguin breeding success has been declining in recent years. Predators in the ocean include sharks and fur seals. The penguins have no defense against such large predators in the water, relying strictly on swimming speed and manoeuvrability, or escaping out of the water to dry land. Like all penguins, their colouration also helps disguise them from predators, as sharks and seals may find it difficult to see the penguins from below due to their white chest, or from above due to their black backs.

Humans have already disrupted Yellow-eyed Penguin populations by introducing some of the penguin predators into their areas. Another way in which humans have affected the number of penguins is through disturbance from the tourism trade (Ellenberg, Mattern and Seddon, 2009). Being a spectacular penguin to look at — along with its endangered status — brings in large numbers of people who want to see these animals in the wild before they’re gone. Research has shown that large numbers of tourists can be associated with reduced breeding success, along with decreased fledgling weight, which can then affect their survival rate in the first year (Mattern et al., 2007). These factors may be influenced due to stress on the adult penguins which may affect normal behaviour.

As the climate is warming, disease is becoming a bigger issue for Yellow-eyed Penguins. Avian malaria was responsible for 29 deaths in 2018/19 (Yellow-eyed Penguin Trust, 2017), a large and impactful number for such a small population. With increased temperatures leading to increases in mosquito breeding, the threat for disease to penguins is expected to increase. Avian diphtheria is also affecting the species, which is commonly found in young chicks. Bacterial plaque forms in the mouth of the chick and is subsequently inhaled, which eventually causes aspiration pneumonia, a potentially fatal illness.

Stress can also cause penguins to become more susceptible to disease, which for the Yellow-eyed Penguin may be coming from increased threats and tourism.

Habitat loss has become one of the main reasons the number of Yellow-eyed Penguins are decreasing (Mattern et al., 2007). In New Zealand, forests are being cleared to make way for field areas for grazing animals or homes. This is then resulting in increased pressure for the penguins as they attempt to find nesting areas.

How can we help these extremely endangered Yellow-eyed Penguins?

Help for the Yellow-eyed Penguin started in the 1980s when the population was extremely low (Sue, 2019). Conservation organisations are focusing on protecting the forest and shrub land for the penguins to ensure they have the space to breed and build their nests, thousands of plants have also been planted around the areas for protection. Although this all sounds beneficial, help is still needed to protect more areas or to re-establish areas that have already been cleared.

In New Zealand, there is the Otapahi Reserve which is a protected area for the penguins, to ensure that they can live and breed without being disturbed by humans and predators. Dunedin Wildlife Hospital has also begun catching penguins with injuries and rehabilitating them. Veterinarian Lisa Argilla states, “We do what we have to do to save the species, as we cannot fix climate change and habitat destruction” (Biologicaldiversity.org, 2014).

Did you know about Yellow-eyed Penguins? And how rare they are? Did you like what you learned by reading this blog? Leave a comment below. And please help us to continue to provide you with penguin news articles by donating to Penguins International.