By Georgia PodmoreSeptember 8, 2019 No Comments 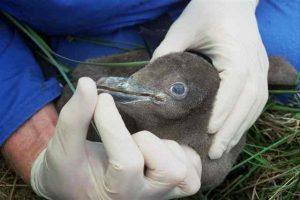 Avian diphtheria is a term applied to a variety of infections such as avian pox. One type of this illness can be transmitted through mosquitos and causes wart growths on un-feathered skin from a virus. A second form of this illness affects the throat of the bird and is caused by a bacterial infection. This post will be discussing this second type of avian diphtheria that caused by bacteria known as Corynebacterium diphtheriae. This bacterium causes a membrane to form in the throat and produces toxin that can cause organs to fail (Massaro et al., 2004).

How does avian diphtheria affect penguins?

Avian diphtheria is common in young chicks and can cause aspiration pneumonia, subsequently causing blockages to the airways (Pfaff et al., 2017). As the airway becomes blocked, the penguin not only has difficulty breathing, but also is unable to feed, which then causes starvation and dehydration (Ratz and Murphy, 1999). Some penguins have been known to overcome the disease and survive, however these survivors typically reduced growth rates and generally have a poor condition (MacLean, 2016).

Yellow-eyed Penguins in particular are susceptible to avian diphtheria

Yellow-eyed Penguins are affected highly by avian diphtheria with reports in 2004 of 90% of New Zealand mainland penguins having contracted the infection, and over 50% resulting in fatality (Doc.govt.nz, 2014). These figures demonstrate why research is so important to be undertaken on this disease, investigating its causes and understanding potential treatments. Throughout New Zealand, researchers are continuously observing Yellow-eyed Penguins and are desperate to pinpoint the causes of this devastating infection, while also attempting to develop a vaccine and increase survivability in these highly endangered penguins. In 2014, the Department of Conservation and Ministry for Primary Industries began a study on the disease, but despite intensive research, still unfortunately stated that they “came away empty handed” (Doc.govt.nz, 2014).

Previous anecdotes pointed to seasonal cycles in avian diphtheria, causing outbreaks colonies every other year. Veterinarian Kate McInnes, however, believes this is no longer the case, and that availability of food plays a much larger role in contraction of the disease (Yellow-eyed Penguin Trust, 2018). According to Dr. McInnes, “If we have a really good year with little break out there seems to be lots of food, whereas if we have less food, we do not seem to see [avian diphtheria]. But this has not yet been proven as a factor” (Yellow-eyed Penguin Trust, 2018).

How are penguins with avian diphtheria being treated?

To ensure the highest possible success rate of any penguins there are now vets and rehabilitation centres on hand to help nurse sick penguins back to health. In 2015, 46% of the chicks that contracted the disease were given antibiotics daily for five days. These treatments were shown to reduce pain and swelling in the afflicted penguins, and appear to be increasing survival rates (Pfaff et al., 2017). The number of Yellow-eyed Penguins is declining, sadly, and this disease is a big factor in why the numbers are continuously dropping. It has been reported that in 2014, 77 chicks hatched, but after the outbreak of avian diphtheria only 55 chicks fledged successfully (Yellow-eyed Penguin Trust, 2018).

The good news, however, in that some chicks are surviving the infection, which offers a glimmer hope for these endangered Yellow-eyed Penguins. After many years of studies by dedicated researchers and countless samples from infected penguins, researchers are starting to be able to understand the disease. Mel Young for instance, a DOC Ranger in New Zealand, found that chicks appear to catch an unknown virus first, then caught avian diphtheria as a secondary disease while their immune systems were compromised (Yellow-eyed Penguin Trust, 2018). Small steps such as this finding will eventually lead to a cure for such a debilitating disease in penguins.

There are a variety of diseases that can affect many species across the world. Avian diphtheria is an infection that is causing fatalities to the Yellow-eyed Penguins of New Zealand, and the cause is still unknown. As the Yellow-eyed Penguin is an endangered animal, it needs to be understood that there is a large amount of help and funding being put towards conserving them, whether this be through research or rehabilitation. Research is continuously being undertaken on avian diphtheria and even though there have not been many answers about the disease, there are signs of survival in penguins. This is a good indicator that the disease can eventually be treated, and vaccines created.

What did you learn after reading about avian diphtheria? Let us know! And, we more than appreciate any support you can give us to continue learning about penguins by donating to Penguins International.

You can also learn more about penguins by some of our other blogs. Just a couple include: