By Autumn SyracuseSeptember 3, 2019 No Comments 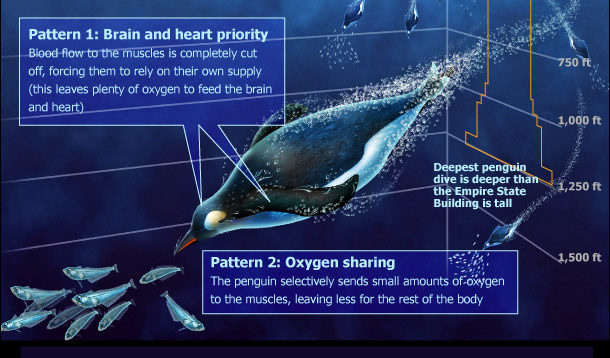 As our penguins swim through the pool in their exhibit at the Aquarium of Niagara, another common question we are asked is “How do penguins breathe? I don’t see their gills.” As we have previously discussed, penguins are in fact a bird. They rely on breathing oxygen from the air like other birds, and like us too. Though perfectly adapted to life as an aquatic predator, penguins cannot stay underwater indefinitely. Their respiratory system contains lungs, like other air-breathing animals, as well as air sacs, a common trait among birds themselves.

Let’s first discuss how respiration in birds compares to respiration in humans. When we breathe air, humans will inhale, drawing air through the windpipe, each of the 2 branches of bronchus, and into each lung. Once inhaled, the oxygenated air will travel into the alveoli where gas exchange will happen. When exhaling, the deoxygenated air will travel in reverse from inhalation. The lungs will compress, and push the air out of the alveoli, through the bronchus, and back out through the windpipe. This type of air flow is referred to as “bidirectional”.

In birds, both inhalation and exhalation will occur, but will flow in a “unidirectional” path. When birds inhale, the ribs expand and oxygenated air travels in the same way as humans: through the windpipe, into the bronchus, and into the lung. Gas exchange happens in the parabronchi within the lung. When exhalation happens, the deoxygenated air does not go in reverse like in humans. The air flows out of the lung via a second bronchus that will draw the air out through the windpipe (Scheid, 1979). Both inhalation and exhalation occur in each species. However, they contrast in the direction of air flow. Let’s look at it like going out for a jog. In human-respiration, air travels in an out-and back-motion. If you want to run a mile, you may start at your house, run a half mile down the street, then turn around to come back. In bird respiration, air travels in a circular motion. If you want to run a mile, you could leave your house and travel in a loop and return home to complete that mile.

Birds have air sacs in addition to lungs

In addition to lungs, birds also have air sacs. Nine of them to be exact: 2 cervical air sacs, 1 interclavicular air sac, 2 anterior thoracic air sacs, 2 posterior thoracic air sacs, and 2 abdominal air sacs. Upon inspiration, air moves into the 4 posterior air sacs. During expiration, the air then moves through the parabronchi in the lungs to allow gas exchange to take place. The second inspiration draws air into the 5 remaining anterior air sacs. The second expiration will then allow air to exit the body through the trachea. It will take two breathing cycles (inspiration and expiration) for air to move completely through the bird respiratory system.

This process may seem a bit confusing, and it was to me at first also! Tracing the air flow through the system makes it a bit easier to understand.  Here is a video to better understand how this process works: https://www.youtube.com/watch?v=4EX2vAg9E3w.

How does a penguin hold its breath so long?

So how does this help penguins while they’re diving and holding their breath? It’s not so much the process, but the physiology of their lungs. Many studies have been done in regards to marine mammals and how diving affects their lungs. The ability to collapse their lungs when diving helps against the extreme pressures of the deep ocean. This also prevents gas exchange from happening at deep depths, which in turn prevents nitrogen from building up in the lungs. If you’re familiar with SCUBA, one of the risks of diving is this build-up of nitrogen in the lungs, especially on rapid ascent.  Diving birds however, and birds in general, have very rigid lungs and surrounding structures which cannot collapse as marine mammals do. Though this sounds counter-productive when diving, it does help when ascending to the surface. Penguins will use their natural buoyancy to spend less energy coming back up to the surface.

Remember the unidirectional flow of air in bird lungs? This process allows only oxygenated air to come in contact with the parabronchi, and allows the lungs to store 30-45% of its body’s total oxygen compared to marine mammals storing between 5-20% of their total oxygen (Ponganis, St. Leger, and Scadeng, 2015). By storing more oxygen, this will help provide the muscles in the wings and shoulders with enough energy to propel themselves deeper into the ocean. After reaching these depths, the air within the lungs and air sacs will then allow the penguin to ascend to the surface naturally.

Penguins are some of the best divers in the underwater world, utilizing oxygen to its fullest. Next time you’re at your local zoo or aquarium, check out these amazing animals and see if you can hold your breath up to the penguins’ expectations! 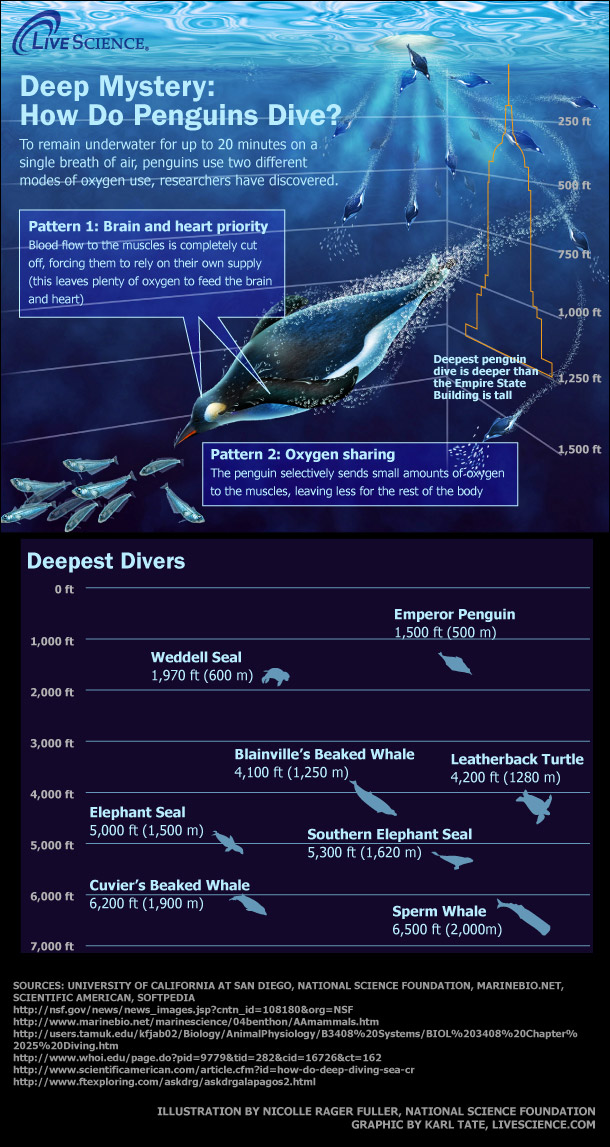 Did you know about how penguins breathe? Let us know what you learned. Also, please help us continue to learn more about penguins by donating to Penguins International. We more than appreciate your support!

Scheid, 1979. Respiration and Control of Breathing in Birds

Email your favorite people a positive message. It’s a penguin post called a Pen Pals. Send as many as you want for FREE.