Penguins and Their Chicks: Super-Parents 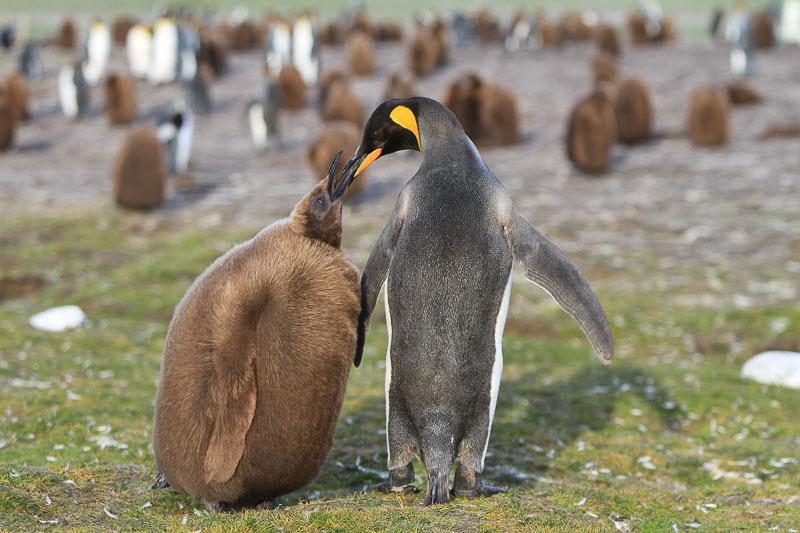 Penguins and Their Chicks: Super-Parents

A common misconception about penguin parenting, instigated by polar explorers in the 1960s, was that penguins regularly deserted their chicks. It was believed that they deliberately starved their chicks in order to force them to leave the breeding colony. This was founded on observations that the chicks of King Penguins (Aptenodytes patagonica) weighed more than adult birds and lost this weight prior to fledging. The desertion theory was subsequently generalised to other penguin and seabird species such as Albatrosses1.

Reproductive effort is a balance between the benefit of increasing offspring survival and costs, including mortality, of the parent. Any increase in parental care must therefore be finely weighed against the price paid. Fundamentally, this boils down to the harsh question: Are they worth feeding?

There are many parenting strategies for successful breeding

Rabbits often produce one litter a month, turtles yield hundreds of hatchlings and provide no parental care, Robins lay 3-4 clutches per year, about half of the chicks do not survive. Penguins tend to go for the opposing parenting strategy of “putting all your eggs in one basket”. And often there is only one egg.

Far from deserting their young, penguins are super-parents. Compared with most sea-birds, penguins have a very long pre-fledge duration; from 56 days in the Adelie Penguin (Pygoscelis adeliae) to a staggering fifteen months in the King Penguin. Penguin parental care can be divided into two periods. During the guard phase, penguin parents brood the chicks intensively, the female often returns to the sea to forage during this period, which can last up to 37 days. In the next phase the chicks form tight groups, or creches as they’re called1.

For King Penguin parents, each fledgling represents a huge investment. They first breed when they are around three years old. The parents spend one summer and two winters raising their young. The chicks’ weight loss, as observed by the explorers, can be explained by fluctuations in food availability. King Penguin chicks pile on the calories, lay down fat deposits and balloon to their maximum weight at four months old. A second peak occurs at around ten months. This enables them to survive long periods without food when their parents are foraging. King Penguins are serially monogamous with both parents sharing all hatching and rearing duties. They cannot raise a chick every year which explains why eggs as well as quite large chicks can be seen at the same time in King Penguin colonies2.

Penguin parents are even featured in movies

The astonishing parental care provided by the Emperor Penguin (Aptenodytes forsteri) has been popularised by films such as March of the Penguins and Warner Brothers’ Happy Feet. The female lays a single egg that is incubated by the male during the long Antarctic winter. A great deal of the 65-day incubation period is spent in darkness. Standing for weeks, balancing an egg on their feet, with no food, in temperatures down to minus 40 Celsius must be the epitome of good parenting. The female devotes this time to replenishing her food reserves in the open sea. On her return, these penguin parents take turns foraging at sea and caring for the chick in the colony. They are truly long-distance commuters taking foraging trips of one to three weeks averaging over 650 km per trip. They go to great lengths, literally and metaphorically, to care for their young. 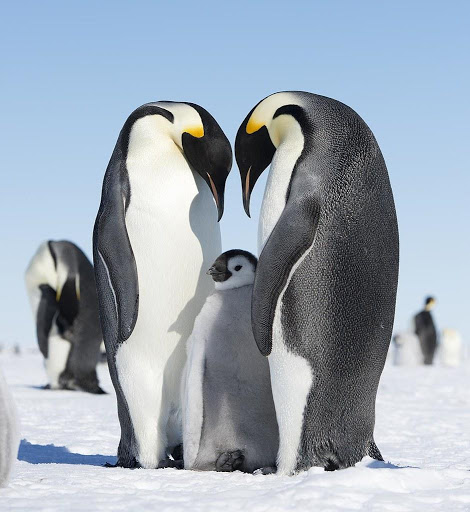 The chicks need to gain significant reserves, particularly in the month prior to fledging. A study looking at the diving behaviour of adult Emperor Penguins provisioning chicks during this period, documented some record-breaking feats. They are the deepest diving of all the penguins with dives of over 500m logged. Many dives were well over ten minutes in duration, with the average number reaching more than 200 per day3.

As if this wasn’t enough, Emperor Penguin parents face an additional challenge in successfully rearing a chick: They breed on seasonal sea-ice. The chicks therefore need to fledge before the ice melts in mid-to-late summer. It truly is a race against time.

Penguin chicks hatch into some of the harshest conditions on earth. To survive independently they need to be able to hunt and capture food, often on their first-ever trip to the sea. To do this they need to be strong, fast and capable. The Gentoo Penguin (Pygoscelis papua) manages this challenge in a unique way. A study found two behaviours not shown in other Pygoscelis species: Delayed dispersal of young, and extended parental provisioning4. 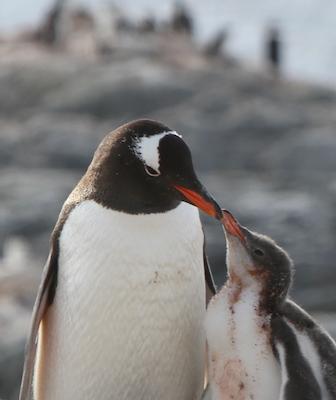 Whilst Adelie Penguins and Chinstrap Penguins (Pygoscelis antarcticus) fledge in a mass exodus on their first trip to the sea, Gentoo chicks take their time and several practice trips. Most Gentoos first go to sea at 70 days old and make approximately five trips in a fortnight before fledging. What is so special about Gentoo Penguins is that they continue to feed their chicks during this period. It is likely that this extended provisioning helps the chicks to hone their hunting skills before fully fledging4.

Do you love the super-parenting of penguins? Let us know! Also, please help us continue to learn more about penguins by donating to Penguins International. We more than appreciate your support!

King Penguins and Their Vocalizations

King Penguins and Their Vocalizations