Do Penguins Have Knees?…and other frequently asked questions 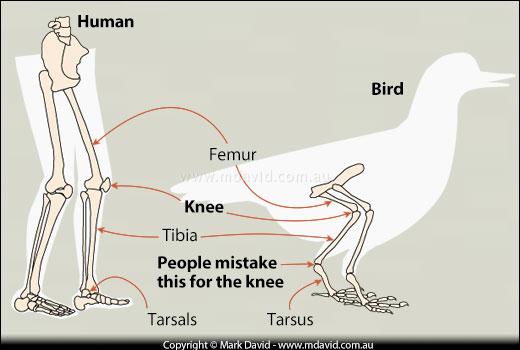 Do Penguins Have Knees?…and other frequently asked questions

by Autumn L. Syracuse, Educator I

“Do penguins have knees?” and “So what is a penguin?” are two of the most common questions I hear regarding our penguin colony on display at the Aquarium of Niagara (www.aquariumofniagara.org). Before we talk about penguin anatomy, let’s discuss what a penguin is exactly, first. It’s hard to imagine that these chunky bipeds that don’t fly — but swim — are indeed birds. Ostriches, emus, and rheas are pretty easy to identify as birds with their fluffy plumage of feathers. So why does it seem odd to include penguins in this group of flightless birds? Are all birds descended from one common ancestor?

Birds are: warm-blooded, air breathing, egg-laying, covered in feathers, and possess a bill. Now let’s take a look at penguins: They check all the boxes! “But why are they birds? They are so funny looking!” Although outwardly different from most other birds, penguins still possess many characteristics of other avian species. Let’s get down to the bones of it.

Okay, so do penguins have knees?

A penguin’s skeletal structure is laid out in the same general pattern as other birds. One obvious characteristic of a bird skeleton is the keel, or sternum. This is designed to be very wide and flat, but lays perpendicular to the ribs. This large bone helps to attach the flight muscles and tendons, which is very important in both form and function to flight. And since penguins “fly” through the water, which is denser, they too need to rely on the keel and flight muscles for propulsion.

Another important adaptation that varies from other flighted (volant) birds is the density of their bones. Most birds we see flying in our yards and neighborhoods have skeletons with bones that are hollow. This creates a skeleton that is extremely lightweight, allowing the birds to be able to lift off into flight. Penguins would not benefit from bones of this same density. Penguins need to be able to dive underwater to hunt for their fish, and hollow bones would make them too buoyant. To help with this, penguin bones are solid and heavy, helping to give them more weight in order to dive deep.

Penguin knees are tucked up inside their body

Penguins are designed to be streamlined and hydrodynamic, so having long legs would add extra drag. Having short legs with webbed feet to act like rudders, helps to give them that torpedo-like figure. If we compare bird anatomy with humans, we would see something a bit peculiar. By taking a look at the side-by-side image in Figure 1, you can see how their leg bones compare to ours. What most people mistake for knees are actually the ankles of the birds. This gives the illusion that bird knees bend opposite of ours. The knees are actually tucked up inside the body cavity of the bird! So how does this look inside of a penguin? In the images below, you can see boxes surrounding the penguins’ knees. 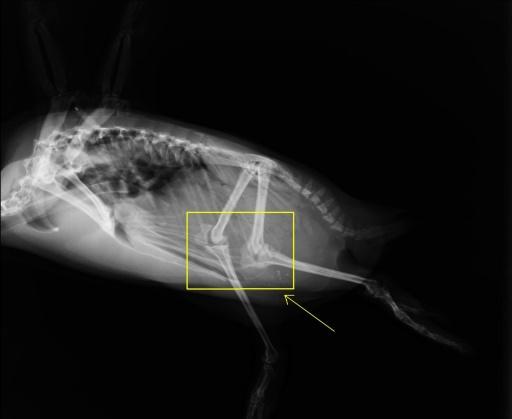 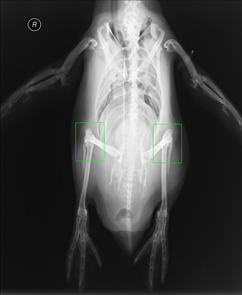 Imagine yourself wearing an oversized shirt, and pulling it over your knees so that only your ankles and feet are showing. Now imagine you’re trying to walk forward in this position. I bet you’d waddle too! This design gives the penguin an advantage in the water to help them swim quickly to catch food or avoid predators. On land, they tend to be slower and clumsy, which makes them more prone to predators. For Antarctic penguins, they rarely encounter predators on land, so having larger bodies isn’t detrimental. For other species in temperate or tropical climates, the water tends to be a bit safer place.

Originally, penguins were classified in the same group as other flightless birds (Ratites). After multiple studies, it was discovered that penguins evolved from flying birds, which were separate from the ancestors of other flightless birds. Mitochondrial DNA has further suggested their relationship to other seafaring flighted birds such as albatross, frigatebirds, and loons. In 2006, more genomic testing suggested that birds of the Ciconiiformes order (storks, gannets, plovers, and boobies) were their closest living relatives (Watanabe et al. 2006). 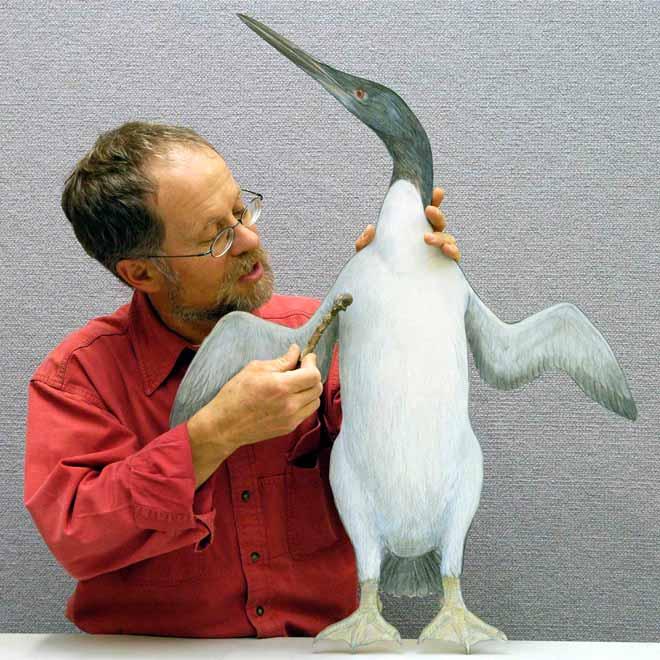 Paleontologist Ewan Fordyce with a model replica of a Waimanu penguin.  https://teara.govt.nz/en/photograph/9803/oldest-penguin

It is still uncertain as to what other bird species may be related to penguins. But from finding and examining their fossilized bones, we have an idea of what they were like nearly 60 million years ago. Known by the genus name Waimanu, these ancient penguins may hold the record for the oldest evidence of bird lineage. Scientists believe that the extinction event that wiped out the dinosaurs during the Cretaceous period, also eliminated almost all bird species. After this catastrophe, it is believed that modern day penguins evolved from the few species that had survived, evolving quickly over a short amount of time—in relation to Earth’s history (Fordyce and Ksepka, 2012).

“So what kind of animal are they?” All of the evidence points to birds, but it still leaves questions unanswered. After learning of this fossil evidence, it leaves me with this question: “Are penguins birds? Or are birds penguins?” When we take a look at other body systems and explore their behavior, things become more “black and white.”

Have you ever wondered before reading this if penguins have knees? Let us know what you think, and what you learned. Also, please help us continue to learn more about penguins by donating to Penguins International. We more than appreciate your support!

Flipper Bands – Are they worth the risk to save a species?

Flipper Bands – Are they worth the risk to save a species?