By Nataly H. AranzamendiMarch 8, 2019 No Comments 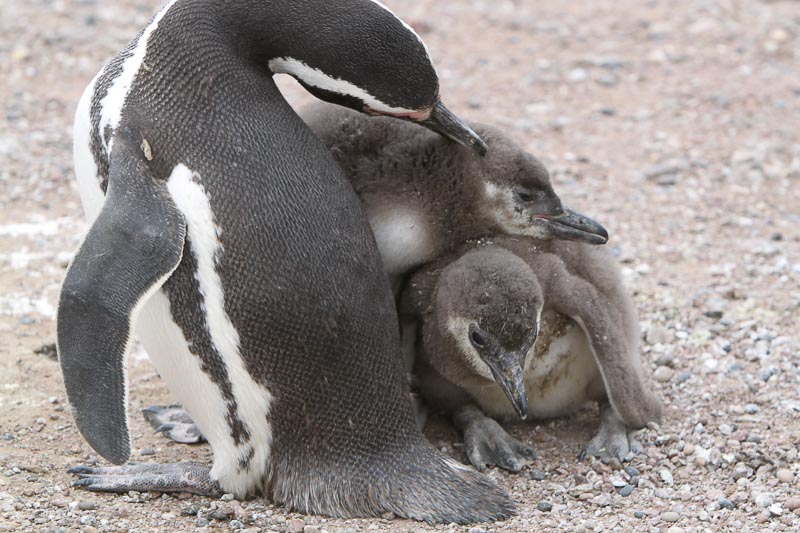 The number of chicks produced and that survive their first life stages determines the success of penguin parents. This has important consequences for populations. Let’s discover how Magellanic Penguins decide to distribute food among their babies.

Year to year variation in reproduction is a central theme in population biology with important consequences on the emographics of any animal species.

Each breeding season, parents have to provide quality food to their offspring in order to guarantee their survival. While some birds produce only one chick per season, others can produce more. In this case, it is expected that parents will distribute food evenly among their offspring.

One thing that has puzzled biologist for decades is that many birds seem to produce an amount of eggs that is larger than what they can successfully raise. Also, these birds lay their eggs in an asynchronous fashion. As a result, asynchronous chicks hatch several days apart, showing a visible difference in size, i.e. the first chick tends to be heavier than the last one. Thus, biologists have suggested that these asymmetries between siblings could facilitate a reduction in the number of offspring.

Do penguins use a brood reduction strategy?

The “brood reduction hypothesis” says that when food is limiting, parents would preferentially care for the offspring with more chances of survival, which is usually the heavier chicks. Brood reduction can also occur via sibling competition, as bigger chicks can succeed more in obtaining their parent’s attention and outcompete their smaller siblings 1.

In a new study 2 , a group of scientists tested the brood reduction hypothesis for three breeding seasons in Magellanic Penguins in Punta Tombo, Argentina.

Magellanic Penguins generally lay 2 eggs four days apart from each other. The first chick hatches with a 2-day advantage from the second, therefore, the chances for the smaller chick to survive are generally lower.

Scientists compared the feeding frequency of parents of two-egg broods vs. parents of single-egg broods, and checked if they were distributing food evenly or differently between their offspring.

The results show that once chicks have survived their first weeks of life, parents with two chicks fed them evenly despite their differences in size. Interestingly, the heavier sibling does not try to outcompete or interrupt its lighter sibling.

An indicator that chicks are hungry is the rate of begging. As soon as parents approached the nests, chicks started begging to request food. The results show that the rate of begging was also the best predictor of the amount of food nestlings were going to receive. 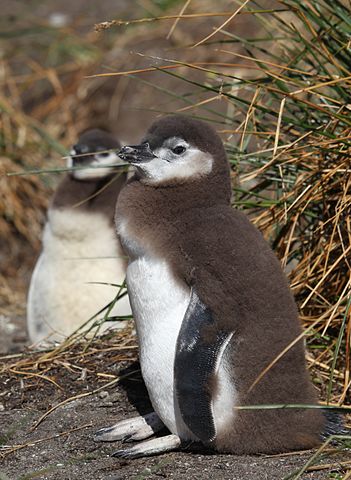 How do Magellanic Penguins compare to other penguin species?

But what does this mean for Magellanic Penguins and how does it compare to other species? It is possible that in this species, neglecting any offspring could be very disadvantageous decision for a parent. Since feedings occur every 3 to 5 days, denying even one opportunity to be fed would mean a certain death for the smaller nestling.

This also most likely means that the period in which the researchers measured these behaviors coincided with a time when parents had already invested too much in their chicks survival.

In other birds with asynchronous chicks, parents can sometimes switch their strategy and preferentially feed the smaller chicks once they have passed their first day’s threshold. However, this switch was not observed in Magellanic Penguins.

Other penguins show different behaviors towards their offspring at the time of feeding. Chinstrap and Adélie penguins, for example, motivate their chicks with a chase prior to feeding, then they only feed the chick that passed the test and behaved more motivated.

African Penguins, which are close relatives of Magellanic Penguins, have offspring constantly interfering with each other at the moment of eating. Thus, older siblings eventually reduce the survival of younger siblings. One possible explanation for this difference in behaviors between the two species could be the fact that the starvation peak period for both species differs. It occurs earlier for Magellanic Penguins and later for African Penguins.
In any case, it is plausible that these observations were made in years of greater food availability, which could have helped the initial survival of the smaller chicks. Most interestingly, we have learned that Magellanic Penguins seem to be fair parents when it’s time to distribute food.

What do you think about these Magellanic parents? Let us know! And, have you read some of our other recent penguin blogs?

Gentoo Penguins–Fastest Flippers in the Falklands

Gentoo Penguins–Fastest Flippers in the Falklands