Fish is a Superfood for Adélie Penguin Chicks

By Nataly H. AranzamendiFebruary 20, 2019 No Comments

Fish is a Superfood for Adélie Penguin Chicks

Adélie Penguins are the most widespread species of penguins. They can be found along the entire coast of the Antarctic continent. Although Adélie Penguins live on sea ice, they need ice-free land to breed1.

During the breeding season, Adélie Penguins form colonies clustered together in larger “mega” colonies which might contain thousands or even millions of individuals. These variations in size and location makes them vulnerable to climatic fluctuations. With the reduction of sea ice taking place due to global warming, most Adélie Penguin populations have decreased over the past 25 years1.

Every year between October and November, at the end of the southern spring and beginning of summer, Adélie Penguins go back to their colonies and build nests made of piled up stones. Both parents take turns incubating the eggs. Once the chicks are born, they remain in the nest for approximately three more weeks before joining communal crèches1.

It is at this moment that parents need to provide chicks with the best possible food available, in order to secure their survival. In a recent study2 that analyzed 20 years of data from 1996 to 2016, scientists have tried to understand which factors can guarantee the successful growth of Adélie chicks and their chances to survive their first year, so they are able to return to the colonies.

Scientists compared two areas in Antarctica: the Ross Island colonies and the Anvers colonies2. Penguin numbers are increasing in the first island while decreasing in the latter. Both sites also vary in the total numbers of penguins. The first island has the largest and most dense colonies.

Turns out that the difference in diets at the chick stage has immediate consequences in their survival2. Survival rates for the chicks fed with fish were higher than those fed exclusively with krill. The “fish chicks” also had higher return rates to the colonies after they left their nests. The body mass of the “fish chicks” that returned compared to those who did not was a difference of 219 g, which is approximately 6.5% of body mass at that stage. This shows that the amount and quantity of food that a chick receives can eventually affect the demography of penguin colonies. 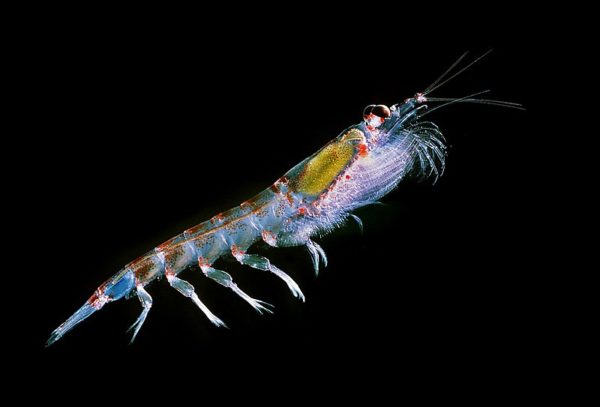 Does penguin fish prey stay consistent throughout the breeding season?

However, the competition between penguin parents increases as the breeding season progresses. This was inferred by the negative trend that the researchers found in the proportion of fish in a chick’s diet over time. Fish became scarcer as time progressed and some chicks even started losing weight. Such an effect was more noticeable in larger colonies2.

When digging more in the data, the researchers found that in order for parents to keep up with the chicks’ demands, they had to take longer trips and dive at deeper waters looking for fish.

So, it looks like even though most parents prefer to feed their chicks with nutritious fish at all times, it is not always so easy to do it. The fact that such important food sources can have plentiful consequences might also help to explain why some colonies have been recruiting small numbers of new individuals every year.

Do penguins have enough silverfish left to eat?

The good news for Adélie Penguins is that the stocks of Antarctic silverfish are not commercially exploited and for now their numbers have remained stable3. However, an urgent next step is to quantify the proportion of these fish in the diet of all Adélie penguin chicks in other colonies.

At the moment, it still remains uncertain how the current changes in climate will affect these penguins, their prey and this delicate balance. Adélie Penguins are one of the best studied birds in the world in relation to changes in the environment developing in the Southern Ocean, but there is still a lot that needs to be discovered.

The continuous reduction in sea ice cover plus increasing sea levels puts Adélie Penguins as perfect candidates for habitat loss. It will be necessary to keep Adélie Penguins under the spotlight, to track further changes in their colonies and to keep monitoring their chick survival, a very important life-stage that impacts the demography of this species.

What a diet these Adélies have! Did you know about this? Let us know your thoughts.

Also check out some of the other blogs we have: